Validate the market.
My quest to improve my network and product-building skills by building 10 products within 12 months has been one of the most fulfilling and exciting endeavors I’ve ever embarked on. This week we finished product number 7, a mobile phone application called Power 20, of which I am exceedingly proud. Power 20 offers intense, 20-minute workouts one can do anywhere, without equipment, by following their iPhone. Once we validated interest in the product with a Launchrock page and estimations of existing app sales, we got to work.

Personally, I’m a former high-school wrestling champ and pole-vaulter, now adult health enthusiast and tech entrepreneur, so for me, Power 20 scratches an itch. Beyond this, I got to collaborate with my my father, Dr. Muzibul Chowdhury, a practicing cardiologist with over 30 years’ experience, to fine tune and test workouts. Together these made creating Power 20 a deeply fulfilling experience.

Assemble a good team, fast.
Anika and I assembled the team within 2 weeks. The core team is just one designer, one iOS developer, and a product manager (usually me, sometimes my wife). Through the Dogpatch network, I connected with Justin Winslow, designer of DueProps and RollCallMe.com, and Greg Cerveny, San Antonio’s most connected iOS developer.comprimé viagra

Keep it simple.
Power 20 does one thing and does it well. It offers a series of 20-minute animations that anyone can follow along with for a healthy and effective full-body workout. Having a simple mandate made it easier to create an initial proof-of-concept. Greg animated the stick-figure models in a week.

Expect expensive mistakes.
Producing the artwork for exercises became a quagmire since we had so many images to create and organize. Getting the file sizes right, experimenting with batch production, and at one point, adding more designers to the team were all part of an expensive and time-consuming learning process.

Expect to hit a wall.
The project started strong but petered out mid-way through. Justin was sick for two weeks, and, impatient to proceed, we temporarily recruited designers from Crowd Interactive. As talented as they are, adding new people mid-way through any project will actually slow progress exponentially.

Get hands on.
Greg showed me how to write and edit workouts as JSON files, so I committed code in the later stages of the app. I don’t usually do that, and this was a really fun part of the project.

Have an intense, week-long final push.
To finish development, I flew Greg in from San Antonio for 5 days. With all of us in one room. our efficiency and speed increased exponentially. Five long days of starting at 1 pm and finishing at 11 pm concluded with the app being submitted to Apple just an hour before Greg’s flight home.

Test with real users throughout the process.
At the same time that we submitted to the store, we had 25 friends start testing the product. This is after 4 months of testing individual workouts. Somehow having a working prototype will get you better feedback than mock ups. Changes we’ll build into version 1.1 include less emphasis on pushups, a more clear timer, eliminating crashes on ipod touches, lower fidelity images for faster downloading, and even adding stripes to the character’s pants to make distinguishing her right and left legs easier. Unfortunately we couldn’t put all those changes into the version 1.0 that we submitted to the store, but we’ll improve it within the month.

Launch.
Launching what our team may think is an imperfect product live is emotionally difficult, but absolutely necessary for progress. Some companies get stuck for over a year, wasting time and money before shipping. Power 20 works, is now live in the app store, and is getting positive reviews. Try it! 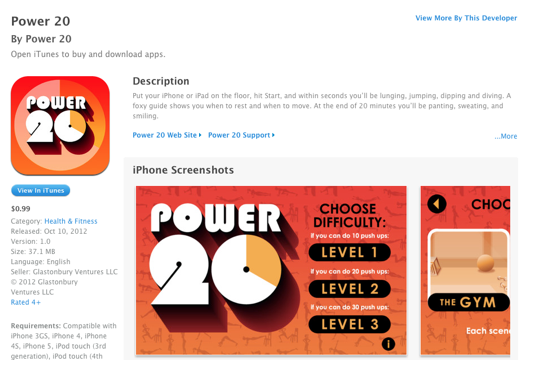