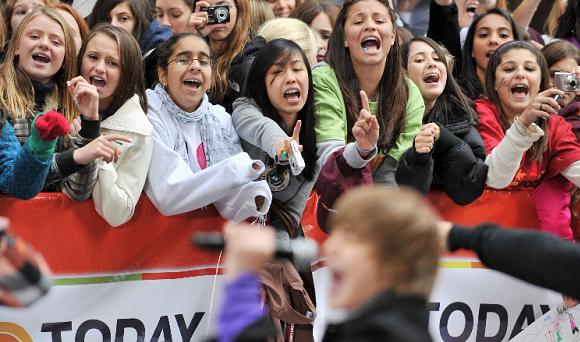 Imagine if your coworkers could be as ecstatic about their work as Justin Bieber’s tween fans are about him… wouldn’t that be scary/awesome?

There’s something about Justin Bieber that makes tween girls go nuts. They swoon over him privately and publicly, individually and in groups, and their love is expressed in Youtube videos, tweets, collages, Bieberized bedroom walls, school folders and lockers. Harnessed Bieberlove could solve the world’s energy needs.

It’s about music, romance, and hope.
Behind every one of those teary Bieber fan eyes is an idea. It’s an idea, or a hope, or a plan, that one day she will be Mrs. Justin Bieber. Yes, she loves the Biebs’s dance moves, his songs, his fame and money, but what she really loves is their future together. And years later she’s still capable of hoping and wishing and planning, but her hope has been squashed by reality enough times that she keeps a lid on it. She’s become hopeless in the face of countless disappointments. cialis générique

Her ability to hope, however, isn’t dead. It can be rekindled with the right combination of context, content, timing and delivery. In 2008, Barack Obama’s first campaign tapped that infinite well of hope to achieve the unlikely.

I want that.
I want the dudes (sadly they’re all dudes right now) on my development teams to be more like tween Bieber fans. Dreaming, hoping, planning for an awesome future for our company. Plastering their bedroom walls with company paraphernalia, tearing up when we deploy code. My job is to create the context, content, timing and delivery of messages to uncover that.

Steps to Bieberize your worforce

1. Give everyone a plan. Everyone, myself included, needs a plan for the foreseeable future and they need to know how the current work fits into that plan. For example, I’ve shared the plan to sponsor US visas for my developers in Pakistan, and we’re working with lawyers to make that plan work. The success of the business is tightly linked to the likelihood of sponsoring visas to live in the US.

2. Hand over ownership. Make people responsible for their work by giving them wide authority and decision-making power. I have completely handed A/B testing of my homepage over to one of my developers, and he’s been awesome at optimizing the process. He owns it and nothing’s getting in his way of dominating, just like Bieber fans feel like they own a piece of the Biebs, and no one can stop them from posting awesome Bieber covers on Youtube.

3. Collectively dream. I want my whole team at ClearGears to be embarrassingly rich. We want huge outcomes for the business and we want to upgrade from the motorcycles 4 out of the 5 of us drive to some really blinged out rides. We have a plan for a company meeting in Dubai when we hit the right number of customers. We’re collectively setting lofty goals. It’s kind of like dreaming of marrying the Biebs, but these goals are attainable.