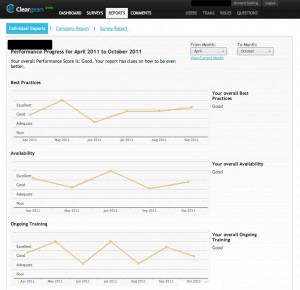 An example of an employee's inconsistent performance, as tracked by ClearGears.

Expect Inconsistency
Everyone on your team will have highs and lows in terms of performance. Outside factors will effect your employees’ performance, and you as a leader can do little about it. Most of the time, inconsistent performance reflects bad habits; some people have months where they drink too much, sleep too little, and eat all wrong, and their performance shows it. Some people (like me) are chronically late.

When I try to address employee weaknesses, I find it useful to be specific about what needs to improve, reward behavior I want to see repeated, and ignore the bad behavior. Beyond that, I suggest actionable steps to improve; things that can be done immediately. Above all, I celebrate even minor improvements publicly. Public shaming, stern talking-to’s, and punitive measures just create a culture of disrespect, resentment, and fear, and often make performance worse.

Establish limits
Keep emotion out of the picture. You may have the sense that an employee is disrespecting you, slacking, or generally destroying the culture, but none of those are reason enough to fire someone. Instead, be clear about what constitutes a violation, and how many violations lead to a demotion or firing. That way the decision isn’t personal or emotional, but factual.

There’s no room for poor performance in a startup.
At a startup, your tolerance for poor performance should be much, much lower than at a more established company. You cannot afford to keep under-performers on your team, and they can really destroy your company culture. Watch your people closely and fire poor performers fast. At ClearGears, we of course use our own tool to track employee performance, and everyone knows precisely where they need to improve.acheter viagra