In evaluating companies at Betatron, where we see up to 3,000 deals each year, we’ve learned the hard way that having too many investors on the cap table can work against a founder.

The Logistics of Handling Many Investors Is Hard

Each investor is a relationship that needs to be managed carefully: you have to reply to investor emails, keep them apprised of your progress, and sometimes get their signature on important changes. This last point – collecting signatures – can be painful and can actually slow down a company. We recommend using tools like Carta to manage investor documents, but sometimes even with those tools you have to chase people down.

For example, we have seen many companies move their corporate headquarters out of places like Bangladesh or Myanmar and into countries like Singapore. Imagine how complicated this would be if you had, say, 50 pre-existing Bangladeshi investors owning shares of the original company.

The Founder Needs Enough Equity For Themselves And Their Team To Survive Multiple Rounds of Fundraising.

Bringing on multiple VC investors can cause a lot of dilution. VCs typically want 20% of the company when they invest. By bringing on more than one VC in an early-stage round, a founder risks getting diluted by far more than 20%.

Most startups need do multiple fundraising rounds before seeing an exit. Dilution for the founders is inevitable in the process, but if individual founders are left with tiny fractions of the company, they may not be motivated to stay on at the company for the long run. Here’s how it might go over many rounds of fundraising on the path to a billion dollar valuation: 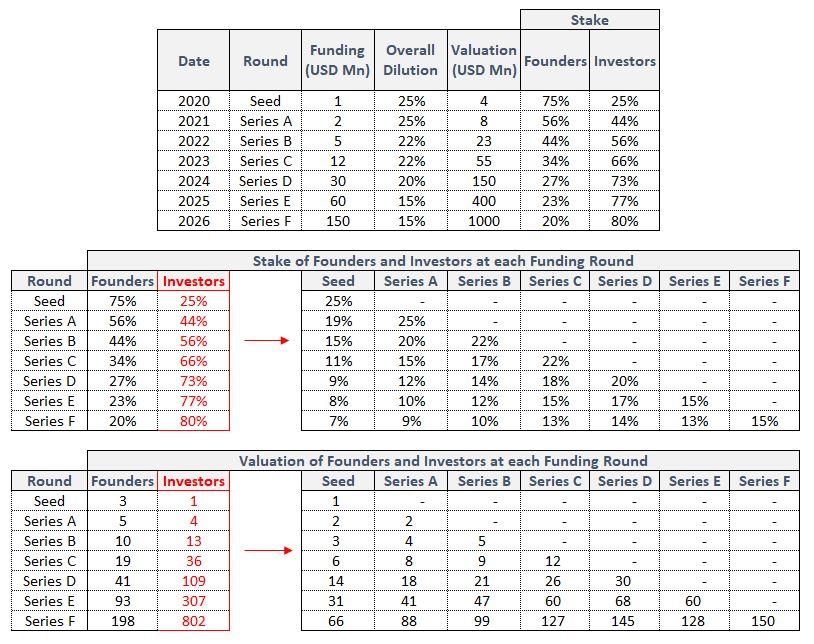 Dead equity refers to investors who no longer add value to the company. They aren’t going to invest again and they aren’t opening new doors for the founders. While you’ll always have passive investors on the cap table, you’ll want to keep them to a minimum so that everyone involved in the company – investors included – are working together towards its success.

How We Define Red Flags

When my team at Betatron invests in early-stage companies, the vast majority of which are either pre-seed or pre Series A. In both cases, we want the founding team to have a majority stake in the company. Ideally this is well over 65% of the company. Having less than 65% isn’t a deal breaker but does beget a few more questions: has the founding team created an ESOP to attract talent? Do they preserve their control over the company through the shareholder agreement? Is their board structured in a way that the team makes final decisions? We want to see that the founders have taken steps to protect themselves and are aware of why their level of equity matters.