Some teams are better at decision-making than others, and groups of smart people are just as capable of making bad decisions as groups of less smart people. But what drives those differences has been a mystery until the relatively recent research by Anita Williams Woolley at Carnegie Mellon and the MIT Center for Collective Intelligence.

Smart Teams Can Perform Far Better Than Individuals On A Variety of Tasks. 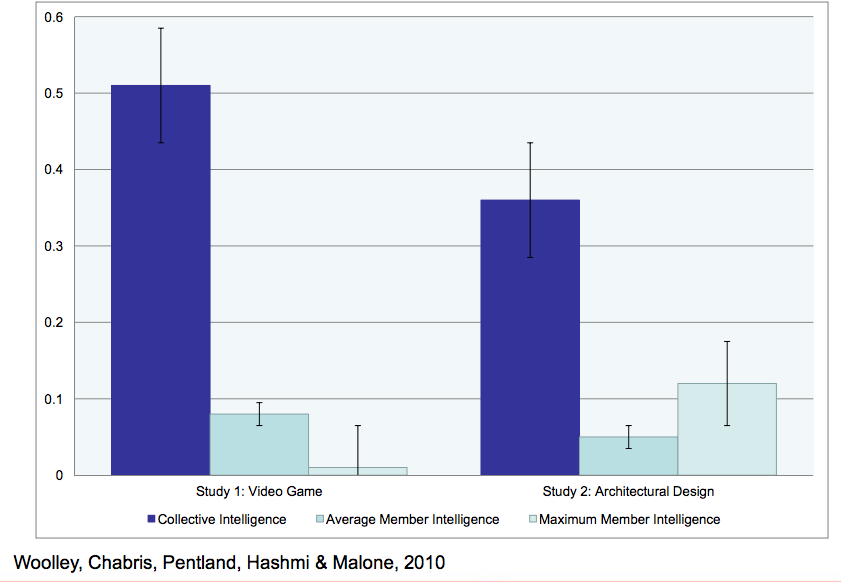 According to the research, smarter teams share three traits.

Woolley’s team grouped 697 people into teams of 2-5 people and measured their performance on a variety of tasks. They found that some teams were not just smarter than other teams, but that individual IQ scores had nothing to do with performance. Instead, three distinct patterns emerged:levitra pas cher

I write more about this here.

I set out to build one of these teams in February 2018.

I did this while working at a company that helps Fortune 1000 firms validate and launch new businesses. First, I tested 20 coworkers for their emotional intelligence. Out of twenty, eight scored over 30. Three of them agreed to continue with the experiment. These three (plus myself) formed the first genius team. Even though the team had  three men and just one woman, our EQ scores were high so I decided to proceed. 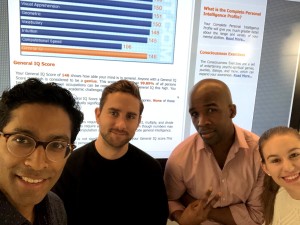 Our 4-person, high EQ team scored in the 99.89% of IQ tests with a score of 146. Pictured above from left: Arshad, Kevin, Jason and Lyndsay.

A  genius score is 140 or higher. Our team scored 146, which is in the 99.89%. 99.5% of all IQ scores fall somewhere between a score of 60 and 140, so this is a rare achievement. We scored exceptionally high on every category except one: computational speed. This makes sense because we deliberated on each answer.

There’s something reassuring about knowing that everyone brings something unique to the table. All we had to do was listen for confidence in our colleague’s voice when choosing the right answer.

Some of us excelled at logic, others at visual and spacial work, and others still at math. It felt good knowing I could defer to Jason on any calculation question while I felt really good about spatial reasoning. We zipped through the test without arguing or insisting. We just trusted one another’s talents.

We shared the findings with the rest of the company but it was largely ignored.

Our genius team wanted to repeat the experiment with more people. We wanted to tackle real-world problems related to client work. But for reasons I still don’t understand, the entire effort was greeted with bemused indifference by company managers.

My takeaway is that if you want to deploy this at your company, you’ll need more than just data. You’ll need early buy in from people running the company.

Here’s how you can create a genius team.

Try it. It’s quick, free or super cheap, and can unlock unlimited potential.

Let me know how it goes, what (if any) variations on my method you use, and which tools you use. Once you have a team in place, the first order of business is to figure out what kinds of questions your team will tackle. I’d love to hear about that as well.