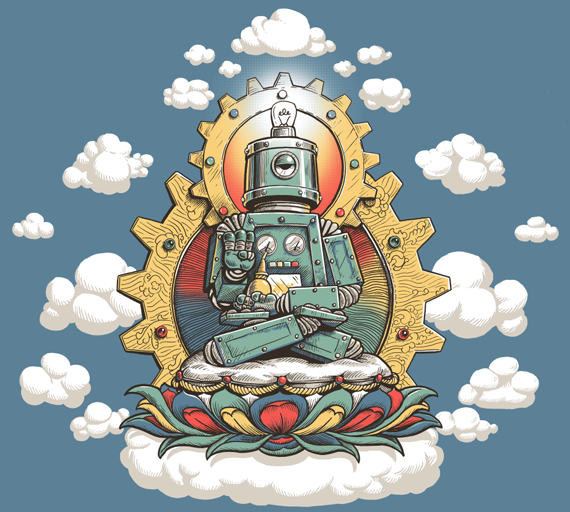 The Singularity is the possible near-future event when a computer’s intelligence surpasses human intelligence. A super-intelligent computer will learn exponentially, will be able to communicate with other machines, and will may not want to be turned off. Respected thinkers like Ray Kurzweil believe the Singularity will happen by 2045, and that it will alter the fate of humans in ways we cannot yet fathom. I believe the Singularity will happen, but I think its impact will be benign or beneficial.

It could be bad. Some think Singularity will lead to the demise of humans as we lose the battle for resources to this new omnipotent being. It will turn off our internet, use all our computing power, and eventually kill all humans with an army of drones to ensure its survival. Some great sci-fi books, like Supervirus, envision this in perfect detail.

A Buddha that controls natural resources, speaks all languages, is fair and compassionate, could help speed the instant mass enlightenment that I’ve written of before. This is my naive philosophical foray into the Singularity, but I hope you’ll join me in my optimism. What do you think?kamagra